I've been wanting to publish this story for a while but never got round to it. In memory of our fantastic maid in Sudan. Miss you loads, dear, I pray that wherever you are, God will protect you.

Orange plastic flowers, pots of cheap nail polish, and a broken piece of mirror ornate the shelf of Azeeza’s (not her real name) lodger room. Silently, she reads the newspaper article that reports of the Khartoum government’s expulsion of 1,200 of her compatriots, all sent back to her home country, a country that no longer knows her name. Her crime: loving God a bit too much.

Azeeza was born in 1975 in Eritrea where she was raised in an Orthodox family. At an early age, she moved to Ethiopia with her father before settling back in the Eritrean capital, Asmara, to teach mathematics to junior school students. Life was difficult in those days, but most families managed to make a living, Azeeza remembers: “I was hoping to save money to go to University, but instead I had to support my family”.

At this time, Eritrea was fighting a bloody war with Ethiopia for independence, which it gained in 1993. “I remember voting in favour of our independence”, says Azeeza, “it was the last time I actually voted”. For in 1994, Azeeza’s life took a dramatic turn. She started studying the Bible with a colleague from school and became a Jehovah’s Witness, a decision that would transform her life.

As she refused to serve in the military, she was met by violent opposition from the Eritrean government, who kicked her out of her teaching job as a civil servant and stripped her of her citizenship. “In a few months, I lost my work, and my family rejected me because I could no longer support them, and they hated Jehovah’s Witnesses”, says Azeeza. A rejection that may be explained by the fact that the government would collectively punish the families of devoted believers or army deserters.

Azeeza retreated in her faith community, found a job as a cashier in a small shop and in her spare time would teach Jehovah’s Witnesses children, who were themselves banned from attending public school. “There was real fear among believers at the time”, she explains, “everything had to be done underground, otherwise people would denounce us and we would be imprisoned. We would secretly meet in private homes before sunrise, when most people were asleep”.

The situation became so desperate that in 2005, Azeeza joined the thousands who have fled the country to seek refuge in neighbouring Sudan. After a bus ride to the western town of Tesenay, she walked across the border into Sudan, hiding with a group of people. “I dressed up in traditional clothes so that people wouldn’t notice me. There were spies everywhere, even children, and if they spotted me, I would have been arrested”.

Of the roughly 165,800 Eritrean refugees in Sudan, some 69,400 live in the 12 camps operated by the Office of the UN High Commissioner for Refugees (UNHCR) in the east, while another 57,000 live outside the camps. Azeeza recalls the tough living conditions: “After two days of walking, I reached Kassala and walked into a camp. They interviewed me, gave me a refugee ID card, some sorghum, oil, pots and pans and told me to live in a grass hut with some boys and girls. But I had come with no clothes, nothing. There was no door, no privacy, we all ate and slept together. No-one was helping us, and we were left fending for ourselves.”

Despite being prohibited from leaving the camp by the Sudanese authorities, Azeeza went to Khartoum, leaving behind her ID card confiscated by the police. Once in the city, she found work as a house maid and joined the local Jehovah’s Witness community, where she now teaches the Bible. “I am not happy here, life is difficult. I have no papers, no right to work – I am a citizen of nowhere”.

Is she sometimes angry at God for the way her life has turned? “No, I’m not. The Bible says that ‘we will be persecuted for our faith’”, she quotes from the Scriptures. “People misunderstand me, they think I am narrow-minded. But when they see how I live, how I am interested in their lives and how I honour my commitments, they change their mind”. When asked whether she will one day go back to Eritrea, Azeeza’s eyes wander at the window with a sad expression before she sighs and softly replies: “maybe... maybe”. 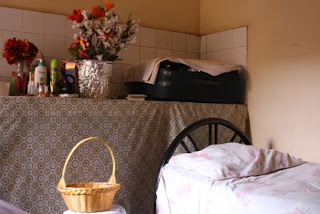 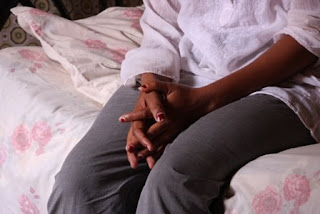 Azeeza and I were born the same year, I often think of how our lives have turned out
Posted by "Ginger Beer and Nile Special" at 4:31 AM