The Holy Grail of Safari Parks

Round 2 of visitors. This time it is my parents who made the amazing 26h journey from Europe to Bujumbura. Since it was their first time in sub-Saharan Africa, we decided to give them a little adventure and drive to Tanzania to see some wild life.
Although we were not convinced that taking our pumpkin would be such a good idea – see previous posts for reasons why – we decided against hiring a local vehicle and set off south after much prayers and preparations.
After almost 7 hours of tarmac roads with lots of potholes, we stopped in Kigoma, across the Tanzanian border to overnight at Jacobsen’s beach, probably Tanzania’s best kept secret. Sadly our first puncture meant that we had to repair a tyre and we got there too late to fully enjoy the sunset over Lake Tanganyika and the simple but lovely facilities. 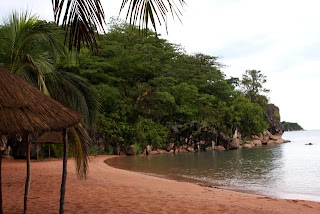 We left early the next morning, and after 10 very long hours on dirt roads across stunning sceneries (and a 2nd puncture/repair session), we reached the gates of Katavi National Park. Katavi is the 3rd largest game reserve in Tanzania, yet claims to have the highest density of wild life in any park of Africa. With less than 1,200 visitors a year, it is also one of the least visited, giving you a taste of what Africa must have been like 50 years ago, which earned it the nickname of "the Holy Grail" of safari parks. 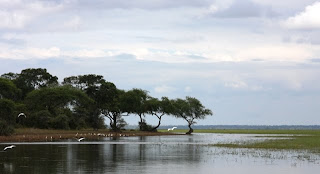 Problem is that Katavi is a dry-season park. Given that we were visiting at the end of the rainy season, tall grass and ample amounts of water meant that animals were scattered across the very large park and therefore a bit difficult to spot. But what you manage to see is truly amazing because it is just you and the game in a vast plain.

The fun bit is that you are allowed to drive yourself in the park, which makes for memorable experiences when your guide tells you to cross over a pool of water where a family of 25 hippos is resting less than 10 meters away, or when the track you’re following takes you insanely close to a herd of 200+ buffalos looking like they’re about to charge your car. We did see an incredible amount of giraffes, impalas, bucks of all sorts and colourful birds. Sadly no big cats or dogs, although we were guaranteed that we’d get great sighting had we only come in the dry season. 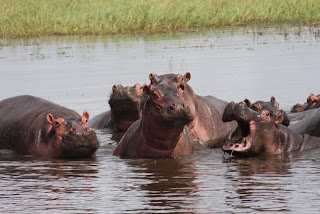 "dont' worry", said our guide, "they're just teasing you - you can safely drive nearby..." 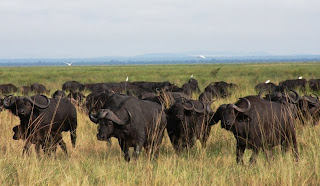 The 200+ buffalos we disturbed during their morning stroll. Not a happy sight. 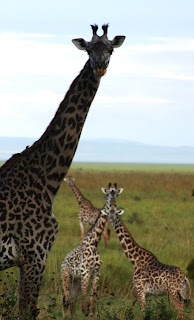 As we drove home, the last bit between Kigoma and the Burundi border proved to be epic. We opted for a shortcut which we were told the Chinese were about to finish building. Unfortunately torrential rains poured for 3 hours the morning we left, soaking the thick layer of dirt the Chinese had laid just days before. The 15km up to the border turned into a vast lethal mud swamp, through which it was only possible to manoeuvre by driving in 1st gear, with the car swaying dangerously by 180 degrees each side. Never in my life have I been driving in such tough conditions. At one point, the car fell into a ditch and it took 2 hours and locals with their hoes to get us out of it. Needless to say we provided a much-welcomed attraction to the nearby villagers who cheered and clapped as the car was finally extracted.

Five hundred kilometres later, another 2 punctures and a renewed trust in our amazing car we reached the safe grounds of Bujumbura, tired but crowned with an Indiana Jones aura, and with a few more stories to tell than we’d have ever bargained for... 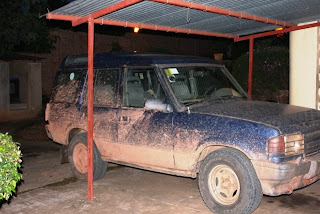 the pumpkin is safely back home

Posted by "Ginger Beer and Nile Special" at 6:56 AM