Last week, a friend from Great Lakes Outreach invited me to join a tour of their projects upcountry, which I gladly accepted. For 3 days, we travelled with a group of Americans from South Carolina who had been supporting school construction and orphanages in various provinces of Burundi.

We split our group of 13 in two 4x4 vehicles and hit the road on a bright Monday morning. Burundi is a beautiful country, so we happily rolled up and down the green hills, chatting along and watching life go by in the small and picturesque villages. Sometimes we stopped at a major junction where fruit and vegetable sellers would come and offer us fresh produce through the car windows, and we marvelled, albeit with some concern, at the cyclists who patiently waited for a truck to drive up the hill only to hang on to its back and get a free ride to the nearest pass. I did feel a bit nervous at times, since cars, coaches and taxis tend to drive incredibly fast- there is no speed limit in Burundi, while its Rwandan neighbour has imposed a 60km/hour limit - and will overtake you with no visibility beyond the next curve, and we did have a few near misses with pickup trucks. 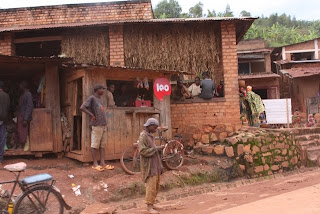 We had just finished our lunch break and left the provincial town of Kayanza en route for Gitega when something caught our attention. We were driving up a hill where a taxi had come to a halt in the middle of the road. As the lead car of our group slowed down and was preparing to overtake it, we in the second car saw the taxi reverse towards our friends. Worried at first, we saw the wheels of the cab change direction towards the road’s side, where we assumed the taxi driver was going to park. But instead of stopping, we watched horrified as the powerless taxi gained speed backwards down the hill and ran over the cliff.

Now Burundi doesn’t have high mountains, but a jump over a 200-300m cliff when no-one is wearing their seatbelt is enough to kill you. As we pulled the car over and organised ourselves to help, we were fearing the worst for the passengers’ lives. A few of us climbed down the hill with dozens of people who had immediately gathered on the accident site. Thankfully, the car had stopped 100 metres downhill, resting dangerously on a large bush on its side and all the passengers – the driver, a woman and her baby who were just coming back from a visit to the local hospital – were alive. Quickly, they were helped out of the car, walked up the hill and sat down by the side of the road. The driver was staring in front of him, with a vague expression. The woman was sobbing in complete shock – she didn’t seem to be able to tell me whether she was hurt, so I checked for bleeding or broken bones and found nothing. Her baby’s face was smeared with a strange liquid, but we learnt that it was due to the antibiotic it had been given at the hospital and that it was fine too. Miraculously none of them even had the slightest scratch and I silently praised God for sparing their lives.

Later on we learnt that the taxi had run out of petrol up the hill. After waiting for someone to donate a bit of fuel, the driver decided to let the car roll down the hill to start the engine. But with no steering or brake power, he’d quickly lost control of the vehicle. It was a scary moment and I’m so thankful that everyone got out of it safe. But as we continued our journey, I was reminded of how vulnerable life can be and how good it feels to be watched over.
Posted by "Ginger Beer and Nile Special" at 12:13 AM