We’ve recently bought a car. Taking cabs has been fun for the first couple of weeks, but you quickly get tired of constantly having to agree the fare (which considering you’re Muzungus will be extortionate) before getting on it, and past 7pm it gets extremely difficult to find one at all, making social life a bit challenging.

So we found a car, in a reasonably bad shape, but we thought we’d rather invest in an old banger than witness mad motorcycle-taxis crash into our pretty new pumpkin. We bought it from a Burundian lady living nearby, whom I entertained with my conversational skills while Ginger Beer sneaked under the car to check the frame and engine. The lady then took a pencil and dutifully wrote a sales contract on a white sheet of paper, confirming that she had received the amount of XXX Burundian francs for the sale of a Geep, cross that out, Jeep to Monsieur Ginger Bear and Madame Nile Spatial. Never mind that there were children’s scribbles left by her son at the back of the page.

Once you’ve bought a new car, the next step is to proceed to a transfer of the legal documents at Les Impôts, the local tax office. After chasing the lady for a week to accompany me, we finally went together. Located at the back of a small street, between a bicycle repair shop and fruit stalls, Les Impôts is a very small office with decrepit green walls and 5 people sharing a couple of desks and 2 electronic type-writers. About 3 months ago, the Burundian government probably in need of money, requested all vehicles to get new license plates. While my lady friend disappeared in the back room to identify the old car plates kept in storage, I grabbed a chair and watched the flow of people nervously slipping into the office, armed with several papers wrapped in files of different colours. After they too were ushered into the back room, they came back and placed their file on the desk of a poor woman looking utterly bored, who was meticulously typing transfer papers VE-RY SLOW-LY with 2 fingers only, stopping every other minute to fan herself in a sigh of despair. An agitated taxi driver tried to sneak his file on top of the pile, but the wrath of the typing goddess left him shell-shocked and motionless for the next 25 minutes, during which he watched a lucky chap – who happened to know the woman – get his file promoted above his.

About 90 minutes later and with only 2 chapters left on the book I’d brought, my lady friend emerged from the back room with an air of dismay. “They can’t find the old car plates”, she announced, which didn’t surprise me as I had noticed the hill of plates left in a mess behind the woman’s desk. “But don’t worry”, she carried, “I’ve left him a little something to help him look for them. Once he calls me, probably this afternoon, we can go back and sort this out”. That’s right, I thought, the poor man just needs some encouragement to do his job. Or not, as it’s been 5 days now and the plates still haven’t been found. 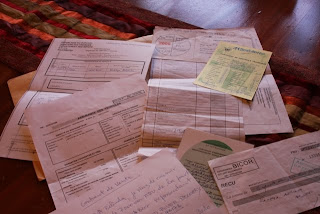