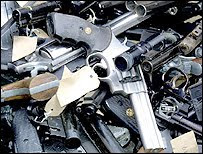 (Health warning – you may not understand if you’re American…)

I’m a terrible blogger. One post every 3 months hardly qualifies for an update on our lives in Burundi. The truth is, quite often life seems as boring and predictable in this African country as it would be back home. That is until something reminds you that you live in a different world – one for instance, that is filled with guns.

In Europe, the sight of a police officer openly carrying a gun may make some of us feel uncomfortable. Unless you live in large cities, most people would stop when hearing a police siren. Here on the other hand, guns are part of everyday life. Traffic police and army recruits carry them in broad daylight, and weapons can often be seen hanging casually off people’s shoulders.

As I was walking down the road that goes past the presidential palace one day, I was forced to step aside as a convoy rushed by, taking Burundi’s Number One to his next meeting or football game. Two sets of official pick-ups closely guarded the presidential cavalcade, and for half a second, I found myself faced by 20 guns leveled straight at my head as their owners chatted leisurely, their weapons resting on their laps. A thought went through my mind - what would have happened if one of them, laughing off his colleague’s joke, had pulled the trigger by mistake?

Another day, I was driving through the centre of town when I spotted a man walking towards the Greek Consulate. Dressed in blue overalls, he was ambling slowly across the street. He seemed like a perfectly normal guy except for one thing: he was carrying a pistol in each hand and he was swinging his arms as if he were taking a stroll. Oddly enough, everyone around seemed totally oblivious to him and went about their daily business as if nothing had happened.

Life in Burundi is similar to home in so many respects. People work, struggle, sometimes make good money, fall in love, hate and betray each other. Most days it feels really normal being here and I forget how distorted a society’s norms have become when people are so accustomed to the presence of guns that they accept it without question.
Posted by "Ginger Beer and Nile Special" at 11:14 AM

So true. Life becomes normal so fast in Buj... and the great banalization of weapons is fascinating to me.