A visit to the Batwa

In my not so many years of traveling through Africa, I have met a few people for whom my heart was broken. Among them were the elegant Peuls in the desert of northern Senegal, farmers fighting the drought in landlocked Burkina Faso, HIV positive women sewing beads for an income in Burundi, or landmine victims learning to live with their injury in Sudan’s Nuba mountains.

I will always remember the day I met the Batwa pygmies of Burundi. I first came across them four years ago when I was working for a development agency and I saw them again last month. They are among the poorest of the poor.

Although the Batwa are the oldest recorded inhabitants of Burundi, they were subjugated in turn by Hutu, then Tutsi tribes around the 15th century and have since been a minority. Illiterate for the major part, they are under-represented in all aspects of life in Burundi. They have often been evicted from their land and have been deprived of their rights. As a result, they get the least fertile, most inconveniently located land, which no-one else wants, where they live in small communities withdrawn from the rest of the world, often in utter poverty. Women eke out a living by making pottery, while the men work for food by carrying sacks of grains or other goods for people to and from the market.

Of course poverty is a difficult concept, and I will not attempt to compare ethnic tribes and establish which ones are poorer. But what strikes me with the Batwa is their reluctance to change.
For a start, they see themselves as a separate people. When asked which tribe they come from, most Hutu and Tutsi will insist that they are Burundians. A pygmy will reply that she or he is a Twa. Then centuries of submission have made them understandably very suspicious of foreigners. Development workers often find it much more difficult to teach Batwa ways to improve their lives (such as building more sustainable housing, sending their children to school, taking up agriculture or adopting some basic hygiene and sanitation) than their fellow Hutu and Tutsi citizens.

I value the work of organizations that run projects specifically designed to help the Batwa. Yet I cannot but ask myself how long and what it will take for an entire generation to learn to trust others, to do things in a different way, possibly even to embrace a new culture so that they will survive. If anyone knows the answer, please let me know. 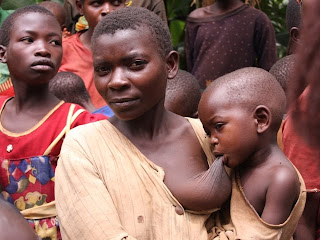 the Batwa (pygmies) are smaller than the average Burundian person 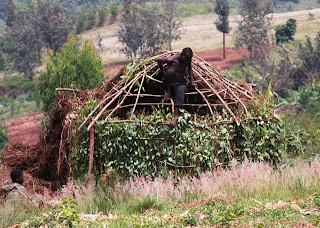 A Twa building his hut, made of wood and leaves 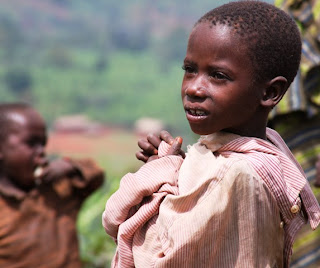 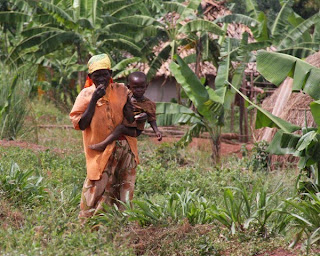 Pygmy woman curious at the visitors

Posted by "Ginger Beer and Nile Special" at 7:40 AM